Synchronicities are common meaningful coincidences that are dismissed by skeptics as random chance events. For me these experiences serve as guideposts at important decision points in my life, indicating that I am on the right track. Carl Jung coined the term, and James Redfield, starting with The Celestine Prophecy in 1993, popularized it. I was recently pleased to discover that the attached Chapter 18 in the book Integrative Psychiatry by Dan Monti and Bernard Beitman is titled Synchronicity and Healing. Intriguing synchronicities related to Finding Pennies from Heaven are a form of after-death communication described in the December Let Magic Happen blog.

On a job interview trip to Virginia I had my very first experience of a double synchronicity in an elevator at a hotel near Edgar Cayce’s Association of Research and Enlightenment (A.R.E.). By double, I mean two meaningful coincidences happening simultaneously in a connected fashion creating an astronomically low probability of occurrence. I described several of them in Let Magic Happen: Adventures in Healing with a Holistic Radiologist. The story below is excerpted from Chapter 4:

Psychics and Synchronicities excerpt:
I had decided to stay at a hotel on the beach a few blocks from the A.R.E. headquarters in hopes I might get a chance to visit there. After a long day of interviews, I returned to the hotel to take the elevator to my room. A man and a woman got on the elevator with me. They were wearing A.R.E. name tags, so I asked them what conference they were attending. The man said it was a conference on near-death experiences (NDEs) and UFO encounters. I responded that I had just helped sponsor a talk in Philadelphia by a famous NDE author named Ken Ring for the medical student group I worked with. I had missed the talk, as I stayed home with my young daughter that night. The man replied, “Sorry you missed my talk, but please join us for our workshop tomorrow.”

It was Ken Ring himself. I was startled by the synchronicity of meeting him. Then it was the turn of the woman on the elevator, past-life therapist Carolyn Gelone, to play her part in my cosmic elevator experience. “I moved here from Philly,” she said, “and before I left, I went to a lecture at your medical school by a radiologist talking about electromagnetic fields and healing.” I excitedly explained that I had given that lecture, and then got real goose bumps when I realized the extreme odds against experiencing this kind of double synchronicity.

This was my first encounter with such a magical intersection of the workings of the universe. The event immediately served to let me know I was in the right place at the right time doing exactly what I was supposed to be doing. It was like being aware of the presence of a dakini, one of the Tibetan angels mentioned in The Secret of Shambhala by James Redfield.  He writes that these invisible guides light the seeker’s path. My synchronous journey that night did not end in the elevator. Ken and Carolyn invited me up to the penthouse suite to meet the rest of the conference faculty. This was the first time I had ever been in a room filled mostly with people who had had died and come back from the dead. I suddenly had a strong sense I was being guided from beyond.

Image of the Month from Chapter 4 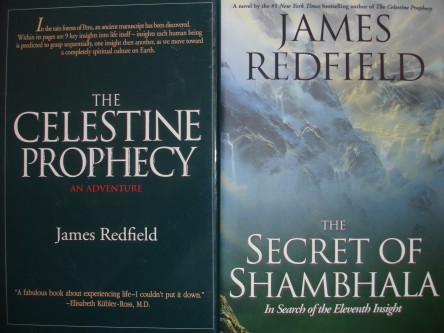 Celestine Prophecy and Secret of Shambhala
These two books describe the first 9 Insights and the 11th Insight. James Redfield’s four books about synchronicity had a big impact on me starting in 1993. They are set in Peru, the Blue Ridge Mountains, Tibet and Sedona. The other two books are The Tenth Insight: Holding the Vision and The Twelfth Insight: The Hour of Decision. The final book came out in early 2012 and incorporates the Mayan calendar. It serves as a spiritual antidote to the accompanying doomsday beliefs.