The first physician to practice acupuncture at Duke University Medical Center was psychiatrist Veeru Goli. I was the second in 1998, and Veeru acted as my mentor in the Pain Clinic. I later went on to practice at Sports Medicine, the Diet and Fitness Center, Student Health and finally in the Integrative Medicine Clinic. Family physician Sam Moon later joined me there, and anesthesiologist Billy Huh began to practice at the Pain Clinic. Anesthesiologist T J Gan published pioneering research on electroacupuncture for control of pain and nausea during breast surgery. Later in 2007 the first licensed acupuncturists were credentialed to practice in the Integrative Medicine Clinic. The story of my first patient at the Sports Medicine Clinic referred by orthopedist Alison Toth is excerpted below from Chapter 11 in Let Magic Happen: Adventures in Healing with a Holistic Radiologist. More details about Understanding the Chinese Five Elements are provided in the July 2013 Let Magic Happen blog. The five element chart I use in clinic is linked here.

Acupuncture Has Side Benefits excerpt:
Queen of wallpaper hangers in Danville, Virginia, Twila Williams had a reputation for possessing the most refined aesthetic tastes. She had an eye for color and pattern that carried over into the rest of her life. This included the way she dressed. On her first visit with me in January, 2002, at the Duke Sports Medicine Clinic, she was wearing a black outfit highlighted by small fiery red earrings and cherry red toenail polish. Despite her professional immersion in the visual world of contrasting hues, she did not realize her color scheme that day spoke volumes. From the Chinese five element perspective, her energetic constitution was revealed to be a fire personality hiding under a dark watery exterior.

Twila’s MRI scan showed bursitis and a small, full-thickness rotator cuff tear. Such a finding would usually would be an indication for surgery, but she was adamant about not having surgery. She was going to get better without it. Alison was impressed by her determination and made the referral to me. I told them both that acupuncture would not fix the hole in her rotator cuff, but it could help with the inflammation in the bursa. At Twila’s first treatment, I needled the acupoints of the feet and hands on the kidney, bladder, heart, and small intestine meridians corresponding to the fire and water elements. When Twila came back the next week, her shoulder was markedly improved. She was excited about getting back to work soon, which would mean carrying large, 75-pound buckets of paste.

Some of Twila’s dreamwork revealed underlying anger related to family issues, so I shifted my choice of acupuncture points accordingly to incorporate the wood-fire circuit. This included the triple heater and master of the heart meridians, as well as the gall bladder and liver meridians, which are known for their connection to the emotion of anger. These points also are useful for addressing tendon abnormalities and would contribute to healing her rotator cuff. Her primary element remained predominantly fire, as evidenced by her generally joyful attitude toward life and her flamboyant fashion style.

A week later, her shoulder was continuing to improve, and Twila said she felt years younger. Her chronically dry mouth had become moist, and she said she felt “juicy” again. By the third week, her sinus condition had cleared up, and her varicose veins had improved. She told me how she used to get up every morning and look at a large bulging vein on her thigh and think how ugly it was. After the third treatment, she was astonished to find it had disappeared completely. To be honest, I wasn’t even aware she had these other conditions, let alone that my treatments would have an effect on them. Twila particularly enjoyed telling her acupuncture healing story when she was interviewed for the September-October, 2002, issue of Duke Magazine.

Image of the Month from Chapter 11 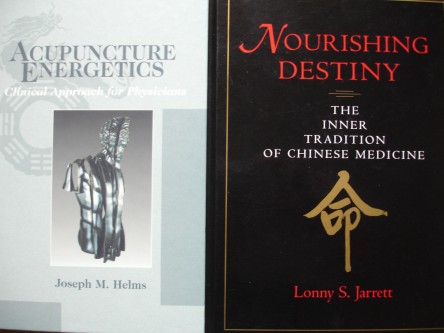 Joe Helms’ Acupuncture Energetics was the textbook for the UCLA Acupuncture for Physicians Course I took in 1998 which provided the basis for my acupuncture practice.  My understanding of Chinese five element theory deepened in 2010 when I read Lonny Jarrett’s Nourishing Destiny to gain more insight into the spiritual foundations of acupuncture. Joe’s approach was based on the French energetic system of acupuncture using the metaphor of electrical circuits to represent the flow of chi through the meridians. Lonny’s descriptions of the archetypal themes of the elements in excess or deficiency drew upon concepts from ancient Daoist wisdom to explain how the emotional challenges unique to each element are transformed into life virtues.