October is National Breast Cancer Awareness Month, and we are reaching out to women all over the country who had dreams warning of them of their breast cancers to participate in a research study. The project is jointly sponsored by Healing Imager, Inc, and Dreams Book, Inc., with IRB approval by the Rhine Research Center. Larry Burk, MD, CEHP, is the Principal Investigator, and the motivation for the research is described in the linked 2013 PsiberDreaming Conference (PDC) presentation, sponsored by the International Society for the Study of Dreams (IASD). The study will be launched from the Dreams Cloud social networking site at as described in the accompanying October 2013 Let Magic Happen blog, Participating in Breast Cancer Dreams Research. The research was inspired by warning dreams experienced by three of my close friends as described in the excerpts below from my PDC presentation. We want to determine what aspects of warning dreams are the most important for healthcare professionals to know about in the future. The study will last until Thanksgiving with plans to present the results at the June 2014 IASD Conference. Please spread the word about the project to your friends and family and to breast cancer support groups around the country.

I first heard of the dream breast warning phenomenon from a physiologist-turned-mediation teacher friend who had a series of vague dreams about cancer culminating in a precognitive dream of having surgery on her breast by a woman surgeon. This startling dream prompted her to go for a mammogram which was normal. Unsatisfied by this result she pressed the radiologist to do an ultrasound. The radiologist refused saying it was not standard practice to do ultrasound to search for a cancer that was not palpable or visible on mammography. She pleaded to have it done exactly where the dream indicated, and the radiologist was stunned to find it.

Another friend is a physician-turned-consciousness researcher who had two disturbing dreams in one night. The first scary dream was about a serial killer. The second one was about having breast cancer. Those were enough to send her for a mammogram which showed a cancer in the location from her dream. A third friend of mine reported that “I had a dream that I had cancer. I went to the G.P complaining of a lump and spasm-like feelings on my sternum. The G.P. concluded it was normal breast tissue, and the feeling in my sternum was dismissed, a devastating mistake. A year later, a different doctor diagnosed stage 3 breast cancer.” http://soniaslifeappeal.wordpress.com/myappeal/ 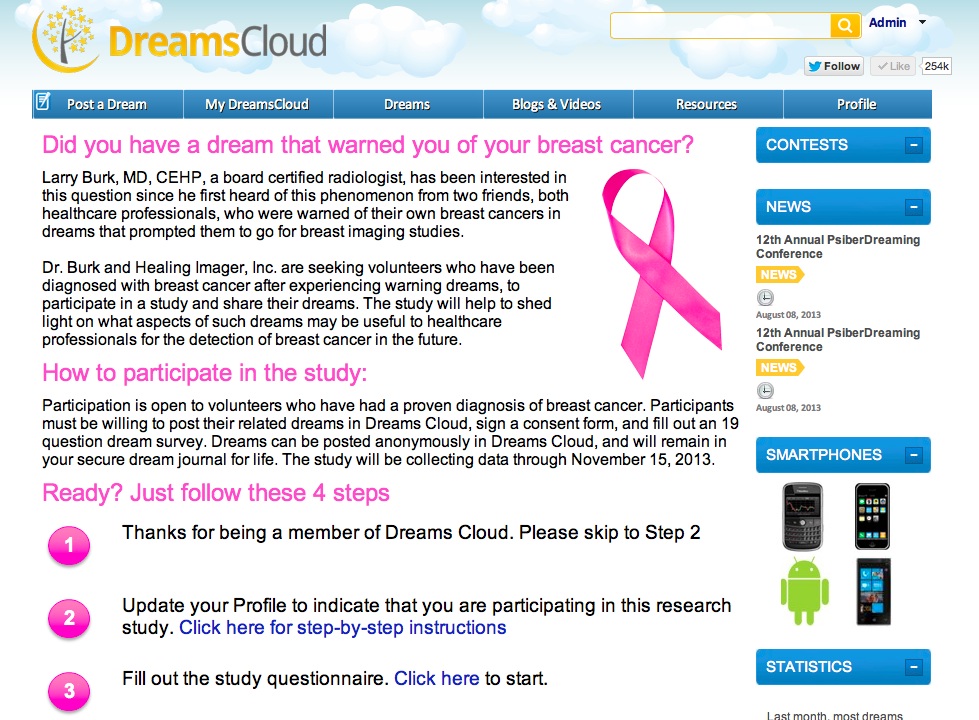 Instructions
Participants will follow the Dreams Cloud link to the Breast Cancer Dreams Research Project page and proceed through four steps. There will be an IRB-approved consent for to sign and a 19 item questionnaire to fill out followed by posting narratives of the dreams.
1) Click here to join Dreams Cloud now. It’s easy, free, and 100% secure. Already a member? Go to Step 2.
2) Update your Profile to indicate that you are participating in this research study. Click here for step-by-step instructions
3) Fill out the study questionnaire. Click here to start.
4) Click on “Post a Dream” in the menu bar above, and submit the dream or dreams that warned you of breast cancer.