Pediatrician Melvin Morse’s 1990 book Closer to the Light launched a 3-year string of No. 1 best-sellers on near-death experiences (NDEs), all with Light in the title.  I later wrote the linked Easter column about this phenomenon in the Duke Chronicle, NDEs parallel Biblical Resurrection.  With the success of these books a number of the authors began publishing related books on nearing-death awareness (NDA), followed by another run of books on the topic of after-death communication (ADC). With this process unfolding in the background I discovered the House of Intuition imagery exercise in Dr. Marcia Emery’s Intuition Workbook, which led to the unexpected ADC below excerpted from Chapter 8 in Let Magic Happen: Adventures in Healing with a Holistic Radiologist. Practical detailed instruction in her technique is provided in the April Let Magic Happen blog, Solving Problems with Intuitive Imagery.

Intuitions from Beyond excerpt:
My most memorable experience with the House of Intuition exercise came when I was out jogging around the Duke golf course. It occurred on the Al Buehler Trail, named after my former track coach and mentor. I remembered that I used to send intentional messages to my dad in 1994 while jogging, asking him to let me know if he died when I wasn’t there. Out of the blue, it occurred to me I could use my new imagery technique to get an after-death message from him.

The movie Forrest Gump was fresh in my mind. Especially Tom Hanks’ famous line: “Life is like a box of chocolates, you never know what you are going to get.” I half-closed my eyes as I jogged and imagined a feather coming down out of the sky, as at the start of the movie. As I watched, the feather landed on the bench at the bus stop where Forrest Gump sat holding a box of chocolates. He offered me one, said the famous line, and then added, “But I bet there’s a message from your dad in one of these.”

The square candy seemed like the right choice, so I broke it open. The cream filling in it magically transformed into a large cream-colored angel floating on the trail as I kept jogging along. When I asked if there was a message from my dad, the angel handed me a red rose. While it seemed like a nice archetypal image, I had no idea what it meant. I thanked the angel for the rose message, and the angel disappeared back into the box. I closed the lid, gave it back to Forrest Gump, and sent the feather back up into the sky, as at the end of the movie.

Later that evening, I went to the grand opening of the new Barnes & Noble bookstore near my house. They had a live Celtic band playing when I walked in. The first book I saw had a feather on the cover. This got my attention right away. Then I noticed the title was The Eagle and the Rose. That sent shivers down my spine. I picked up the book and read the rest of the front cover. The blurb at the top was by none other than James Redfield, author of The Celestine Prophecy, the last book I gave my dad before he died: “A fascinating spiritual adventure, Rosemary Altea’s journey of self-discovery reminds us that our existence is more mysterious than any of us have dared to believe.”

She was the best-known psychic in England, whose bereaved clients often consulted her for reassurance that their loved ones were okay on the other side. Through her Native American spirit guide, Grey Eagle, she retrieved personal information from the deceased relative that no one else could possibly know. I was amazed at the startling synchronous connection between the book and the imagery I had just experienced on the jogging trail. The message I had requested from my dad had been sent in a much more elegant way than I could ever have imagined.

Image of the Month from Chapter 8 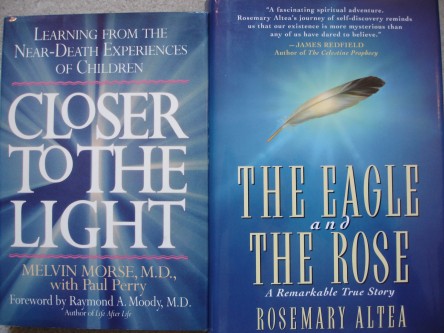 Spiritual Alphabet Soup
NDE, NDA, and ADC are all acronyms for spiritual phenomena centered around Death, literally. As described in Hello from Heaven, Bill and Judy Guggenheim conducted a survey of 3,300 people in the United States and found that 20 percent of the population reported “a spiritual experience that occurs when a person is contacted directly and spontaneously by a family member or friend who has died.”  These ADC phenomena include apparitions, vivid dreams, hearing voices, anomalous telephone calls, smelling a familiar fragrance, and unexplained alterations in mechanical devices or lights.