This week I am going on a book tour to give away free ebooks of Let Magic Happen: Adventures in Healing with a Holistic Radiologist to medical students at Duke, Jefferson and Pitt.  However, from Monday 8/27 to Friday 8/31 anyone will be able to click here and go to Amazon.com to download a free ebook and a free Kindle app that will work on any digital device. Reviews, synopsis, table of contents, and 2 sample chapters are posted at www.letmagichappen.com. For the next 20 months I am going to devote the newsletter to the highlights of a different chapter each month starting with the Introduction this month. In the blog I will present a brief exercise/discussion relevant to that particular chapter.

This month the featured highlight will be the role The House of God by Samuel Shem played in my medical school experience. The British medical journal The Lancet named it one of the two most important American medical novels of the 20th century. The August 2012 Let Magic Happen blog will provide a brief explanation of The Laws of the House of God. Let me begin here with this short excerpt from the Introduction to Let Magic Happen:

“I became depressed during my surgery rotation in the dead of winter at the Oakland VA Hospital in Pittsburgh. Lack of sunlight was probably a contributing factor, with me going to work before the sun came up and coming home after it went down. Adding to the depressing atmosphere, many of the patients were cigarette-smoking alcoholics who had lost limbs due to diabetes rather than war injuries. It was like a scene from the classic medical school parody I was reading at the time, The House of God, by Samuel Shem, the pen name for Harvard psychiatrist Steven Bergman.  His book was mandatory reading for all medical students when it came out in 1978. Written with a twisted sense of humor, elderly patients were referred to as GOMERs, his acronym for Get Out of My Emergency Room. I began to think I would never find a specialty where I could survive, not to mention thrive.”

Since I read the book during my third year of medical school, my decision to go into radiology may have been influenced by the legendary Fat Man’s How to Choose a Specialty colloquium. In it, this experienced and wise resident describes the NPC (Non-Patient Care) specialties: Rays, Gas, Path, Derm, Ophthalmology and Psychiatry. The advantages and disadvantages of each are quite revealing especially since I went into Rays and the hero, Roy Basch, went into Psychiatry. Warning to underage readers: The book is filled with raunchy sex, used by Basch as an escape from the dark experiences of his internship. The stories in The House of God also bear disturbing similarities to symptoms of PTSD among military veterans. He describes the bonding process experienced by the interns under extreme stress and the loss of his ability to feel normal outside the hospital, both characteristics of combat situations.

Years later in 2002, I came across Bergman’s article in the Annals of Internal Medicine, Fiction as Resistance, which explains his journey from traumatized intern at the Beth Israel Hospital in Boston to famous author to Harvard professor of psychiatry. He notes in his early days as a writer he asked, “What is healing?” Then he explains that his question in psychiatry has always been, “How do people change?” I’ve attempted to address both of these questions in Let Magic Happen also.  It is non-fiction, although some of the stories may be so unusual as to seem like fiction. However, I’m not as creative of a writer as Bergman. I couldn’t make this stuff up. It is my hope that Let Magic Happen will be as important to this generation of doctors as The House of God was to mine, although without the raunchy sex and with more hope for the future. Click here to download the free ebook now.

Image of the Month from the Introduction 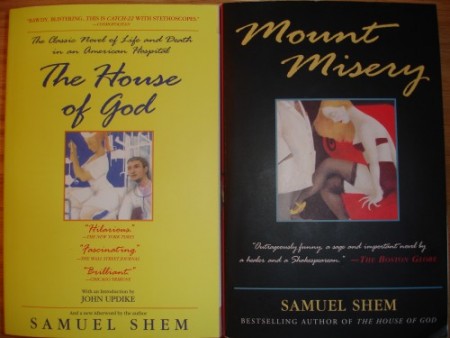 The sequel to The House of God, Mount Misery, was not published until 1997, almost 20 years after release of the first novel. It is also a parody, this time of his psychiatry residency. The sarcastic portrayal of the psychiatric faculty as having more psychopathology than the patients is quite shocking, so it is not surprising that he waited so long to publish. It is also a tale of redemption and justice, two themes that pervade his work. In this book he eloquently expresses his concept of healing, “To use my experience with others who had suffered and my vision born of that experience to bring someone who is out on the edge of the so-called ‘sick’ into the current of the human. To take what seems foreign in a person and see it as native. This is healing.”