Are you curious about miracle stories related to the use of unusual bioelectromagnetic devices? My passion for all things electromagnetic began with MRI, but rapidly spread to collecting old electrotherapy antiques from the early 1900s, modern brainwave entrainment machines, and scientifically tested devices developed by one of my mentors, Norm Shealy, MD, PhD. In Chapter 2 of Let Magic Happen: Adventures in Healing with a Holistic Radiologist, I discuss how my interest in MRI safety concerns led me down the rabbithole into a bioelectromagnetic wonderland, catalyzed by reading The Body Electric by Robert Becker, MD, the inventor of bioelectric bone healing. Below I’ll discuss the highlights of two devices utilizing the high-voltage, low-current, high-frequency Tesla coil named after my electromagnetic hero Nikola Tesla. Then in the holiday spirit, we will have a visit from Dr. Nicholas Tesla, the great-grandson of the famous inventor, who will demonstrate a few of my favorite ones in action on the accompanying Halloween Let Magic Happen blog, ELECTRIFYING Yourself for Fun and Healing.

Let’s start with this excerpt from Electromagnetic Perils and Promises titled Electrical Quackery: “While I was at Jefferson my dad, a curious physicist with an interest in all sorts of gadgets, became obsessed with collecting antique electrotherapeutic devices. He started visiting pawn shops and antique stores in search of what are known in the trade as quack boxes. He found quite a few working models, including a Patent Magneto-Electric Machine, an Electreat, and even a Tesla Violet Ray Machine, which came complete with an instruction manual and tubes of multiple sizes and shapes for inserting in different bodily orifices.” The Violet Ray device is pictured below. It was often recommended by Edgar Cayce in his readings a hundred years ago, but has since fallen out of use.

Jumping ahead to Chapter 17, here is a description of Norm Shealy’s latest invention for which I am one of the participants in his current research project: “We are testing his new RejuvaMatrix mattress, which has a copper grid inside it hooked up to a Tesla coil based on microwave resonance therapy from Russia.  I’ve done my half-hour morning meditation, yoga, and qi gong on the mat every day since 2009, bathed in its 54 to 78 GHz frequencies. Since the output is similar to the non-ultraviolet frequencies generated by the sun, but in much smaller doses, Norm refers to his technique as solar homeopathy. He has gathered preliminary data showing an increase in the length of telomeres (regions at the ends of chromosomes that protect genes from degradation and become shorter with age). This is thought to be a sign of reversal of the aging process. My first blood cell telomere test after one year showed no positive effect on the expected one percent yearly shortening rate of my telomeres. My second-year test, however, showed a recovery of telomere length greater than my original baseline. Norm reports that 80 percent of the 36 individuals who completed the first year have had average regrowth of telomeres of 5.7 percent. Only time will tell if the RejuvaMatrix mattress is the ultimate longevity device or not.”

Image of the Month from Chapter 2 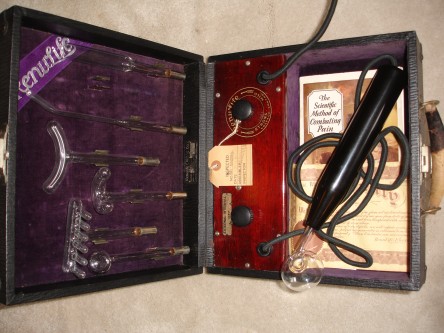 This Renulife machine from 100 years ago features a Tesla Coil and multiple different applicator tubes which glow purple and emit sparks when in the External mode. The Internal mode just provides a gentle warm sensation. There are also Strong and Weak settings which can be adjusted to your liking. The tubes include a general round general applicator, a hair comb, a nasal probe and a rectal probe as demonstrated in the video in the accompanying Halloween Let Magic Happen blog. Edgar Cayce mentioned the Violet Ray Tube in his readings for various nervous conditions and exhaustion. They can still be found today in pawn shops.