My most direct confrontation with skeptics in an academic setting occurred in 1998 in front of the Duke Medical School Curriculum Committee. I was presenting what I thought was a well-balanced, evidence-based proposal for a new integrative medicine course for medical students when I was blind-sided by 2 conservative skeptics on the committee. The details are summarized in the accompanying June 2013 Let Magic Happen blog, Swimming with Sharks in the Workplace. The turning point in the experience came when I synchronistically discovered the linked article about The Right Man Syndrome as described in the excerpt below from Chapter 10 of Let Magic Happen: Adventures in Healing with a Holistic Radiologist.

Transforming Education excerpt:
Still shaking from my harrowing academic NDE, I got home to find the latest issue of Alternative Therapies in my mailbox. Opening it, I saw one of editor Larry Dossey’s classic “Notes on the Journey” manifestos, “The Right Man Syndrome: Skepticism and Alternative Medicine.”  The article began by defining the syndrome, which is attributed to science fiction author A. E. Van Vogt and was popularized by writer Colin Wilson. I’d never heard of it before. I kept reading. “The term describes an individual, almost always male, who has a dynamic yet fragile personality and possesses a manic need to feel that his actions are perfectly justified and correct at all times.” Larry goes to great lengths to apply this definition to the behavior of “skeptical” individuals and organizations that attack alternative medicine. “The Right Man perceives himself as a member of an elite group of defenders of reason, besieged on every hand by hoards of irrational barbarians.”  The word “skeptical” is given in quotes, as Larry argues that in fact the scientific method is not adhered to by these zealots. Instead, they adopt a form of “pseudo-skepticism” where decisions are made based on previously held beliefs, not on evaluation of the actual evidence.

Now I understood what I had just encountered. What a relief! Part of me wished I had read the article before the meeting. I would have been better prepared. Another part of me appreciated the joke of cosmic timing that allowed me to fully experience the backlash against my challenge to the status quo. Armed with this useful perspective, I set about preparing for the next meeting. A month later an integrative medicine team accompanied me to the meeting. It included a professorial white-coated quartet, Marty Sullivan, Redford Williams, Sam Moon, and Lloyd Michener, chairman of community and family medicine. Lloyd’s department was the sponsor of the course, CFM-251, Integrative Medicine: Research and Clinical Perspectives. The proposal was approved without my having to say another word, and there were only two dissenting votes. Thus we joined the dozens of the medical schools around the country incorporating alternative medicine into their curricula, including UNC, which had started their course several years earlier.

Image of the Month from Chapter 10 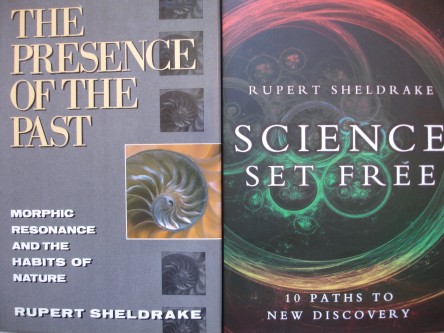 What does it actually take to change someone’s worldview?
Cambridge scholar Rupert Sheldrake has shown that it is clearly not scientific evidence that can accomplish this transformative act. If that were the case, parapsychology would be the dominant paradigm right now. Sheldrake did a literature survey of the use of the scientific method in various scientific disciplines around the world and found that the gold standard, rigorous blinded methodology, was used in 85% of parapsychology experiments. Medical science came in a distant second at 24%, followed by psychology at 5%, biology at 1%, and physics a dismal 0%.  He shared this information in 2007 with a small group of us at the ACEP conference over late-night beers. He admitted that as an accomplished debater, he liked nothing more than to publicly demolish the arguments of the famous skeptics using this kind of data.