My worldview was changed forever in 1992 by the experience described below with Intuitive Medical Diagnosis by Caroline Myss. It was particularly startling to me as a radiologist, as I thought all internal diagnosis required a high tech device like an MRI or CT scanner.  Seeing into the body without a machine was outside my comfort zone. Since then, however, I have met many other intuitives who can do the same thing, albeit, not necessarily to the same level of accuracy as Caroline. Subsequently, I also discovered that Diagnosing Intuitively from a Distance is also possible to learn as detailed in the January Let Magic Happen blog.

My initial experience occurred on a day when I had just made an MRI diagnosis of a malignant sacral tumor growing into the spine in a young girl in my practice as described in the opening story of Chapter 5 of Let Magic Happen: Adventures in Healing with a Holistic Radiologist. Prior to writing the book, I also published the story in a Psychic/Intuitive Diagnosis article in the Journal of Alternative and Complementary Medicine. I happened to have met Caroline a few weeks before at the Association for Research and Enlightenment in Virginia Beach.  We had discussed the possibility of doing research on this topic, and she returned my follow up phone call that afternoon. After initial hesitation, she graciously agreed to demonstrate her abilities on this case as described in the excerpt below.

Diagnosis from a Distance excerpt:
Caroline wanted just the name and age of the patient without any other information about the scan or the girl’s symptoms. I made sure there were no clues that would tip her off to the diagnosis. There were five seconds of silence, and then she said, “There is a tumor in the pelvis working its way into the spine.” In basketball terms, Caroline had made a “slam dunk.” I was stunned, but managed to ask her to tell me more. “This is an immature girl who has a fear of going through puberty,” she said, and I responded that it might just be an infection. But she said, “No. It is a malignant condition.” Her words came with a sense of knowing and certainty.

After another couple of seconds, she continued. “There is a severe imbalance of the second energy center, or chakra, due to her genetic background, her family history, and her current relationship issues.” I asked her how she got this information. She said I had given her the “spiritual signature” of the patient, and she tuned in to Jessica through me. At first, I thought she was just reading my mind, which would have been impressive enough, but she clearly had access to more information than I did. My mind was reeling from the shock to my belief system as I struggled to fit her abilities into a box I was familiar with.

Sure enough, the biopsy a few days later revealed a malignant sarcoma. It had a relatively poor prognosis. Jessica got chemotherapy followed by radiation to the pelvis, which would likely affect the ovaries and her ability to have a normal puberty. When I left for North Carolina one year later, Jessica was still alive, and I have no further follow up. I was left to ponder the fact we had charged $2,000 for the two-hour MRI diagnosis that Caroline had made remotely in about two minutes. The idea of doing research to validate what I had just experienced became something of an obsession for me.

Image of the Month from Chapter 5 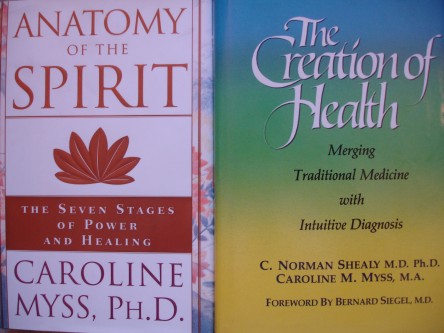