EFT for Physical Symptoms of Grief

Do you have recurrent sinus and lung infections? If so you may have grief stuck in your body. I am going to be presenting a breakout workshop at the 16th Annual Association for Comprehensive Energy Psychology (ACEP) Conference on 5/30/14 in Phoenix, AZ, on “Energy Tapping and Acupuncture for Physical Symptoms of Grief,” based on my August 2013 Reality Sandwich blog and the excerpt below from Chapter 14 of Let Magic Happen: Adventures in Healing with a Holistic Radiologist. This approach can be combined with the Transforming Symptoms as Metaphors technique in the Let Magic Happen January 2014 blog to create a unique healing method which I will be presenting in an all-day Greensboro AHEC workshop on 4/2/14, “Symptoms as Metaphors: Using Imagery and Emotional Freedom Techniques.” If you would like to begin working with this method now, a 22 minute video of the group experiential exercise from my February 2013 Spiritual Frontiers Fellowship presentation is available in the Let Magic Happen store now for $4.99, the same price as the ebook.

Tapping Our Hidden Potential excerpt:
The importance of the metaphorical approach in my own life came home to me in a powerful way via a seemingly insignificant symptom. One Sunday, Dagmar and I went to the movies in a slightly chilly, drafty theater, and I felt myself coming down with a cold afterward. In Chinese medicine, a viral infection can be thought of as a “perverse wind invasion,” an interesting metaphor in itself. Based on this principle, we recommend a lot of useful cold remedies to patients at OHS. When I felt myself getting a cold, I used as many remedies as I had available. After doing EFT on myself, I drank fresh, steaming, ginger root tea while taking a hot bath to sweat out the perverse wind. Then I took a few dropperfuls of Echinacea tincture. It all worked, and I woke up the next morning feeling refreshed and healthy.

Unfortunately, by bedtime I discovered I had a mild but nagging case of post-nasal drip that generated an annoying cough. Most frustratingly, the coughing kept me awake. After doing some EFT on the symptoms with no results, I decided it was time to look it up in Louise Hay’s book. The metaphor she listed was “Inner crying.”  This didn’t resonate with me in the least. “No, not me,” I said. However, nothing relieved the coughing, so I moved downstairs for the night to give Dagmar some peace. Although I felt all right the next day, my dripping and coughing continued unabated for two more nights. By now, my resilience was breaking down.

The third night I found myself getting desperate. By two in the morning, I was coughing so hard I felt like I had broken a rib. Finally surrendering to my not knowing what to do, I started tapping like mad on “I have no @#$% clue why I have this terrible cough.” Suddenly, out of the blue, or rather out of my suppressed unconscious memory, I flashed back to the movie we had watched, which was Shall We Dance. This movie features Richard Gere taking ballroom dance classes from Jennifer Lopez as a manifestation of his midlife crisis.

Gere tries to hide his secret passion for dance from his family, but his teenage daughter sees right through his façade. Aha! I immediately saw that Gere’s daughter in the movie reminded me of my own daughters, who I was not seeing that often since my divorce a few years earlier. I started doing EFT on “I really miss my girls” and cried deeply for a few minutes while tapping. It was about three o’clock by then. I got up and sent them both e-mails in the middle of the night telling them how much I missed them. They thought that was a bit unusual, to say the least. However, my inner crying was gone, and so was my post-nasal drip. The cough disappeared, too, and I slept soundly the rest of the night.

Image of the Month from Chapter 14 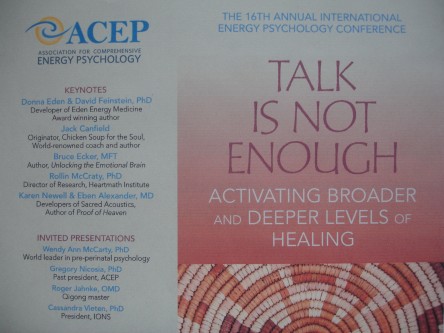 Register Now!
Prices go up after February 17.
Up to 44 CE Hours Available including APA credits
http://www.energypsych.org