So what do I mean by invisible disease? New Zealand clinical immunologist-turned-psychiatrist Brian Broom estimates that 25% of the patients in his clinic have psychosomatic illnesses that manifest as frank somatic metaphors such as those described in his linked article “A Reappraisal of the Role of ‘Mindbody’ Factors in Chronic Urticaria.” Using the titles of Dr. Broom’s two books highlighted below, these Meaning-full Diseases are symbolic of The Patient’s Other Story in a way that is invisible to clinicians in Western medicine who are trained to think in a linear fashion. Acupuncture practitioners who use Chinese five element theory are more likely to be willing to explore a non-linear approach to symptoms as I will discuss in a 2 hour online Pro-D webinar on October 8, 2013, Symptoms as Metaphors: Eastern and Western Symbolic Approaches.  I will also be addressing these issues in my preconference workshop at the Canadian Energy Psychology Conference in Toronto on October 24, 2013 as detailed in the August 2013 Let Magic Happen blog Finding the Hidden Message in Your Symptoms. A preview of these talks without the experiential exercises can be found on my 45 minute Symptoms as Metaphors video Part 1 and Part 2. More insight into what will be covered can be found in my recent Reality Sandwich blogs, EFT for Symbolic Immune Diseases and Allergies and EFT for Physical Symptoms of Grief with case histories excerpted below:

Tomato Anaphylaxis excerpt:
After reading Dr. Broom’s work, I wondered whether the most acute and life-threatening form of immune disease, anaphylaxis, might also have a symbolic component that could be addressed with EFT. One of my EFT weight loss patients mentioned that he had a rare allergy to tomatoes causing him to turn red and swollen in the face like a tomato with severe respiratory distress leading to shock. It required carrying an emergency EpiPen. He revealed being bullied as a teenager in the school cafeteria by boys who threw tomato sauce on him, splattering his clothes like blood. After much tapping he went to a party and ate cocktail sauce for the first time in years which freaked out his friends, but caused no symptoms.

Pneumonia and Sinusitus excerpt:
Dr. Broom also observes that symbolic diseases are essentially “invisible diseases” to most conventionally-trained physicians. This was the case for a recent client of mine, a psychotherapist who had experienced multiple episodes of pneumonia and sinusitis since the death her husband nine months earlier. Several courses of antibiotics failed to resolve her sinus condition, so she was scheduled for sinus surgery. Our first tapping session focused on unresolved grief, and her sinuses began to clear. She called the surgeon, who couldn’t see the symbolic disease, to cancel. After a couple more EFT sessions and some acupuncture she expressed her gratitude for having avoided the surgery. 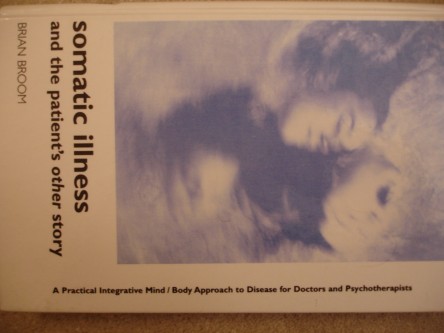 Dr. Broom has written two remarkable books detailing his investigations into symbolic diseases. Somatic Illness and the Patient’s Other Story is his first book from 1997.  Meaning-Full Disease: How Personal Experience and Meanings Cause and Maintain Physical Illness came out in 2007. In these books he explores the psychiatric literature to review the history of psychosomatic disease. Dr. Broom notes that “the meaning-fullness of all kinds of disease is relevant at a very practical level, because attention to meanings aspects leads to significant new therapeutic options for health professionals, and to a horizon of hereto unimagined healing possibilities for the patient.” He does not use EFT in his clinic, but has other effective psychotherapeutic approaches.