My interest in MRI safety led me down a controversial rabbithole into the mysterious underworld of ElectroMagnetic Field (EMF) health hazards. These concerns began in the 1980s with power lines and radar, continued in the new millenium with cell phones and Wi-Fi, and are now focused on Smart Meters which remotely monitor the power coming into your house. People with Electromagnetic HyperSensitivity (EHS) are like the canaries in the coal mine warning the rest of us that there is something disturbing in the environment all around us. My friend Andrew McAfee is a faculty member in the music department at UNC who has been challenged with EHS for many years, and he is sponsoring a screening of the award-winning documentary Take Back Your Power: Investigating the Smart Grid in 2131 Kenan Music Building on 4/1/14 at 7 PM. The story of Andrew’s journey with EHS is excerpted below from Chapter 17 of Let Magic Happen: Adventures in Healing with a Holistic Radiologist. The April 2014 Let Magic Happen blog features a technique for Grounding Heavy Energy The Inca Way to take back your power not from utility companies, but from confrontational people who engage you in challenging interpersonal interactions. No fooling!

Too Much Body Voltage excerpt:

Despite the lack of hard evidence from possibly biased studies, Andrew McAfee and other EHS sufferers have amassed volumes of anecdotal reports that cannot be so easily dismissed. He told me that at the peak of his symptoms, he could tell whether a switched-off TV was plugged in or not as soon as he entered a room. Andrew wasn’t implying he had psychic abilities. The EHS made him feel worm-crawling sensations on his cheeks and gave him pressure headaches. These symptoms progressed until he lost concentration and memory, his eyes stopped focusing, he felt burning on his skin, and dark splotches appeared at the outside corners of his eyes. All this began after Andrew moved into a house where there was a TV/radio tower across the street and several cell phone towers within half a mile.

He finally became desperate enough to contact a professional EMF mitigator named Charles Keen, an engineer with EMF Services who happened to be driving through North Carolina on his way to Florida. After Andrew called him, Charles came with his equipment to check out the electrical environment in Andrew’s house. He found problems with the wiring in addition to the exposure from the towers. Some of the grounds in the house were not functioning properly, and there were eight volts of electricity running through Andrew’s bed. After these malfunctions were corrected, Andrew felt an improvement in his symptoms, but the towers continued to overwhelm him. Whenever he drove past them, he felt pressure and burning. Soon he could no longer tolerate even being around cell phones at all, and he got an immediate runny nose and started sneezing when he went near a Wi-Fi source or a cell phone in use.

Andrew’s wife felt some of the same symptoms, so they moved several miles away. But those towers are everywhere, so they had to move again. The severity of his symptoms finally led him on a quest to find a holistic way to rebuild his immune system and improve his tolerance to EMF. He had his mercury amalgam fillings removed and did numerous detoxification and chelation therapies. He took colloidal silver and dozens of other nutritional supplements. He had energy healing, acupuncture, and sound therapy sessions. It took him several years to achieve a 75 percent recovery to the point where he could tolerate working at a computer again.

At his workplace in UNC’s music department, where he is an adjunct horn instructor, Andrew’s problems arose again when universal Wi-Fi was installed in the newly constructed music building. After discussions with the department’s administration, he kept his office in an old building that had less exposure to wireless signals. Through assistance from the university information technology group, he has also been able to arrange temporary disconnection of Wi-Fi in his classroom when he is teaching there. These adjustments have made it possible for him to function in the academic environment that is becoming increasingly saturated with electropollution. However, it does raise questions about how background radiation might be affecting the performance of students, especially sensitive musicians.

Image of the Month from Chapter 17 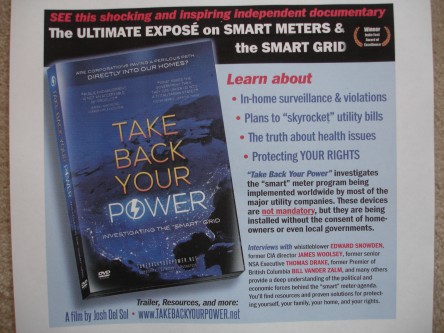 Free Admission
Tuesday April 1, 2014, 2131 Kenan Music Building, UNC Chapel Hill, 7PM.
For more information please contact Raleigh Electrosensitivity SupporT (REST).
Award-winning documentary investigates the “smart” meter program being implemented worldwide by most of the major utility companies. These devices are not mandatory, but they are being installed without the consent of homeowners or even local governments.